The exciting and new leaf and root carbohydrate (CHO) analysis technology was launched in March 2020 by Agri Technovation. The technology is ground-breaking and based on scientific research developed over many years.  The Analysis programme is as far we have established a first in the world. Even Though the scientific approach on the role of carbohydrates is quite old, the commercialisation of the interpretation of the results and analytical techniques used to assist growers, is a first. The CHO analysis program consists of routine leaf (four per season) and root analyses (once per season). These results are then compared to a norm for sugar, starch, and total carbohydrates for different phenological stages of the plant’s life cycle. Carbohydrates play important roles in root and shoot growth, flowering, fruit set and fruit quality. It is of particular importance in perennial fruit trees such as avocado, citrus, and nuts, as well as deciduous crops like grape, pome, and stone fruits, which are known to have high energy demands. For the first time a technology is available for commercial growers to measure their tree carbohydrates and manipulate it accordingly to achieve optimal and consistent yields.

The launch of this new technology was accompanied by excitement and attracted the interest of various fruit industries and growers from USA, South America, Australia, and New Zealand, which have made use of this service.  Up to date the Agri Technovation Plant Physiology Research Centre analysed 4964 samples. The majority of the samples were analysed on citrus, and the results and benefits for growers was ground-breaking, since it complements the current data of orchards and improves important and costly production practices.

The next step in the project is to develop cultivar specific norms as well as area specific norms with different climatic conditions.  Another main priority of the team is to introduce the technology on other crops such as, almonds. This will coincide with the launch of a new product range in the 2021 season, where growers will be able to manipulate their tree carbohydrate status.

The next round of ITEST™ Carbohydrate leaf sampling will take place from February to April (autumn), which will coincide with the ITEST Leaf sampling (mineral nutrient analysis). This data will be important to ensure that the energy status of the crop is sufficient to deliver good flowering and fruit set during the next season. During the current season, from full bloom to mid-December 2020, we accumulated only 33% of last season’s heat units. Flowering was later and the fruit set was heavier. This all indicated that size, peel quality and high acids will be an issue. It also means that the harvest will be much later. With a wetter winter predicted, harvest will also be delayed further. This will increase the risk of alternating wear! If the fruit is left to ripen on the tree for an extended period, the less carbohydrates can accumulate which will place the tree under unnecessary stress and have an impact on next year’s crop. 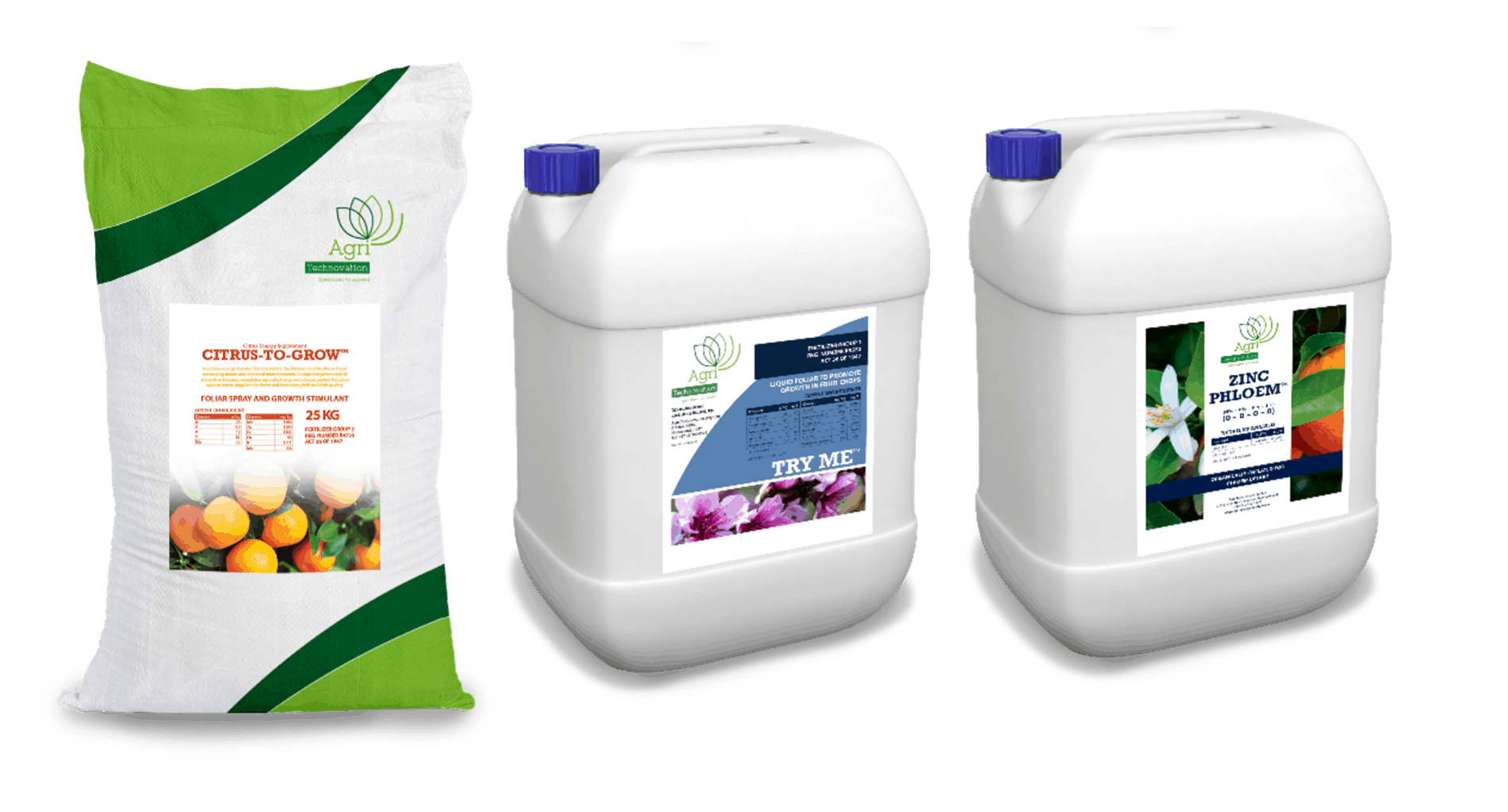 From a plant nutrient management perspective, it is important for optimal flowering to ensure that sufficient levels of the appropriate nutrients are present in the plant during the flower initiation period. Agri Technovation has formulated high quality products which are easily taken up by plants, to address deficiencies of important plant nutrients. A combination of the products CITRUS-TO-GROW LMOTM, ZINC PHLOEMTM and TRYMETM, which are high in phosphor (P), magnesium (Mg), Zinc (Zn), Copper (Cu), molybdenum (Mo) and other micro elements, is sprayed as a foliar feed mixture just before and during flowering initiation. Try Me has the additional benefit of an increase in polyamine levels of the tree, which assists with the alleviation of stress levels. The combination of products is sprayed from mid-March until the end of April which helps with the increase of sugars and starches.